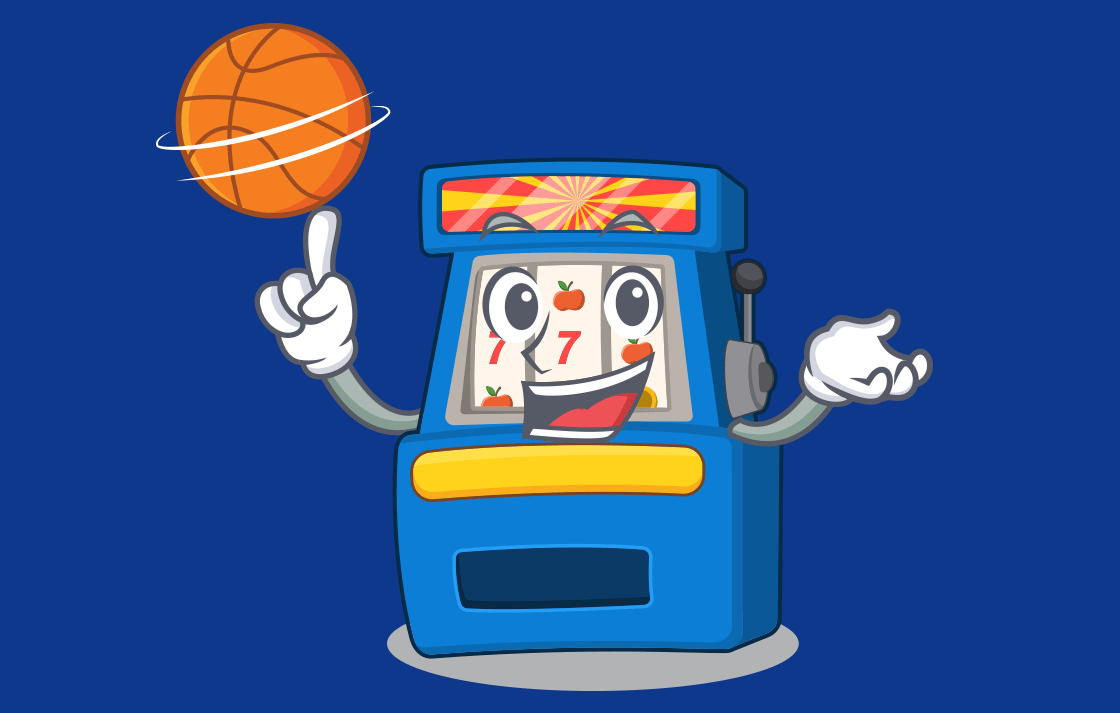 For most sports fans basketball is synonymous with NBA. If you want to complement the joy of watching the NBA games on television, there are a few options available. You can place bets on the basketball markets offered at online sportsbooks. Many best no deposit casinos offer basketball themed slots with attractive bonus features. Check out some of the best.

You might also be interested in reading our article about football themed slot machine games with free spins slots.

Basketball Star is arguably the best slot game based on this sport for the simple reason that the win animations recreate the fast paced action of the arena.

The Basketball Star logo is the wild symbol. It can appear stacked on reels 3, 4 and 5. The high paying symbols are basketball players. In the win animations you will see them blocking, dribbling, passing and shooting. The low paying symbols are gold medal, sneakers, energy drink and basketball arena.

Basketball Star is a 243 ways to win online slot game. It will have lower volatility as winning combinations will occur more frequently.

This slot game will take you back to the decade when the Chicago Bulls reigned supreme in the NBA.

The wild symbol is the basketball pro that is depicted as a bull. This symbol also awards the highest line payouts. Continuing the concept of personifying animals, cow is the cheerleader, bulldog is the coach and ram is the referee. The other thematic symbols are milk carton and hoop. The low paying symbols are the playing card icons designed like the numbers on basketball jerseys.

Basketbull is a 5x3 video slot with 25 variable paylines

Slot dunk is the most exciting of basketball manoeuvres. The slot game takes its name from that.

The reels are set in the basketball arena. The cheering of the crowd can be heard in the background. The high and special symbols are animals playing human roles and crafted in a caricatured manner. The trio of hippo cheerleaders is the wild symbol. The tiger, elephant, crocodile and monkey are the basketball players. They start paying from two-of-a-kind combinations. The low paying symbols are colourful playing card icons.

This is one of the simpler basketball themed slot games, but a lot of fun nevertheless.

Again, the reels are set in a crowded basketball arena with raucous cheering in the background. The basketball hoop is the wild symbol. The high paying symbols are logos of imaginary basketball teams, but you will find resemblances to actual NBA teams. Chicago Bulls and Miami Heat are obvious. The low symbols are playing card icons on basketball jerseys.

Basketball is a 5x3 video slot with 20 fixed paylines.

This game is apart from the others because it features basketball as played in the streets of every town and not the NBA arena.

The reels are set in makeshift basketball court with colourful graffiti on the walls. The symbols are equally colourful and eye-catching. The silver basketball is the wild symbol. The high symbols are jersey, amplifiers, sneakers and spray paint cans. The low paying symbols are the playing card icons done in imaginative graffiti styling.

Street Basketball is a 5x3 video slot with 25 fixed paylines.

In due course many more basketball themed slots will hit online casinos. The time is ripe for a branded slot featuring one of the big NBA teams.