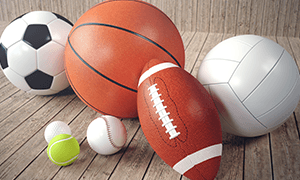 Casino software developers have created online slot games based on multiple industries such as movies, music, sports and reality shows. So it is no surprise that there are a number of exciting slot titles that revolve around American based sports that are available to play with US no deposit bonus codes.

The major leagues in the United States such as the NBA, NFL, MLB and NHL have a massive fan following throughout the country and a number of fans also love to pursue playing their favorite sport in the form of online slot games. Here are just some of the most popular USA sports themed casino slots with free spins that US players can enjoy. 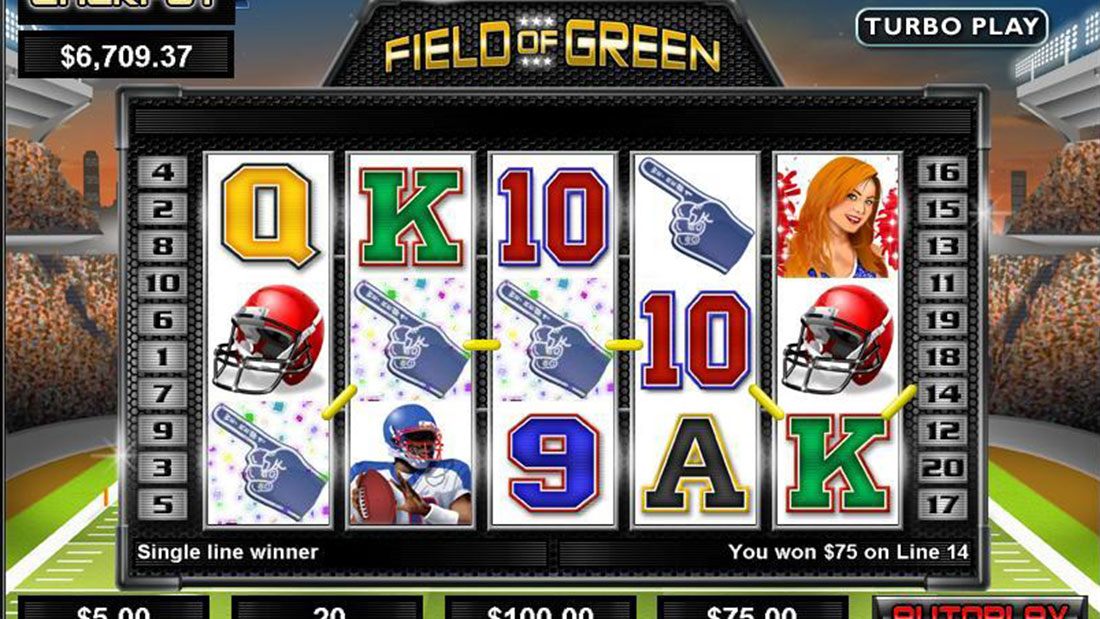 Realtime Gaming's (RTG) Field of Green showcases the All-American pastime of American football (not to be confused with soccer or Association football). You don't need to be Joe Montana, Peyton Manning, Aaron Rodgers, or Tom Brady to fully appreciate the level of detail and passion expressed in this 5-reel, 20-payline RTG slot. As far as betting is concerned, you can start with the RTG standard of 0.01 to 5 per line. The symbolism or iconography of the game is pure Americana.

It's filled with letters of the alphabet, abstract numbers, foam fingers, cheerleaders, pigskins, helmets, and whistles. Watch out for the Football Player icon, because it's the highest valued symbol of the bunch. Landing 5 of them will give you 4,000 coins while landing a Trophy plus 4 of them can get you 8,000 coins or double the 5-of-a-kind win. You can also trigger the bonus game whenever you get 4 or more Football symbols on the reels. You can also double your total bet for landing 2 Football symbols from left to right or right to left. 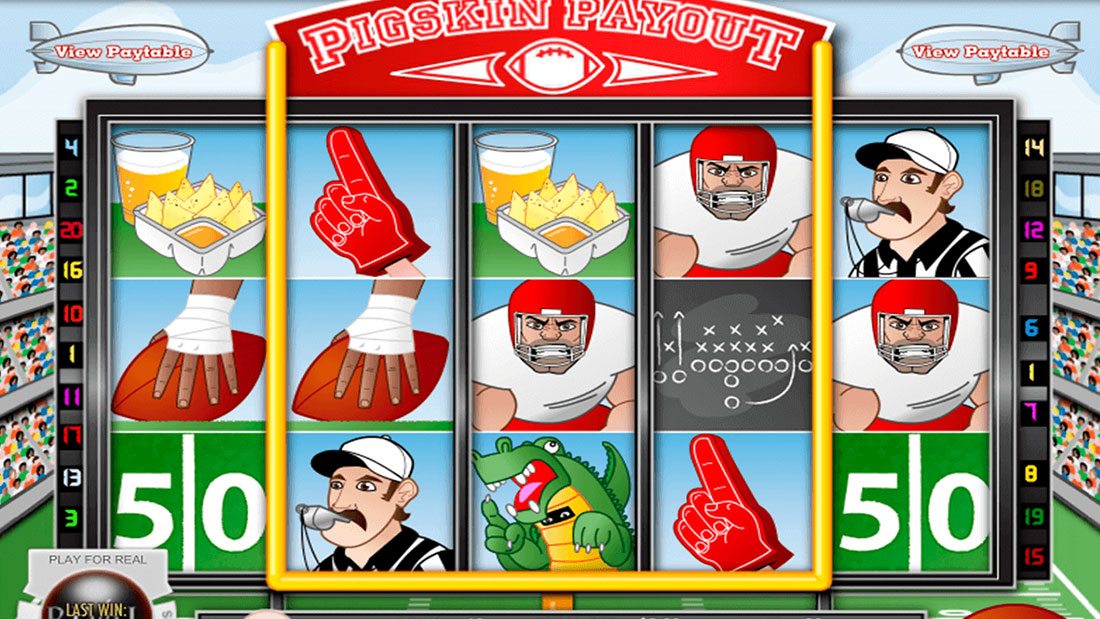 Rival Gaming's Pigskin Payout is the developer's answer for a baseball-themed slot. Baseball which was once America favorite pastime has lost its place in recent times to football which has had better ratings and attendance in recent years. However, there is still a strong baseball fan base in the country who love playing baseball themed slot games such as Pigskin Payout. This slot title is filled with loads of Multipliers and Free Spins that make every spin an exciting experience.

This 5-reel, 20-payline video slots title include the pigskin baseball, a foam hand, some famous snacks at baseball game stadiums like hotdogs and nachos, a blackboard containing tactics, the referee, and the like. The Scatter is a stadium icon and landing three or more of them activates the Free Spins feature. During the event, the 1st and 5th reels turn wild, which further guarantees your win after every spin. Your maximum bet per spin is $50 and the Free Spins even come with a Multiplier of three times the value of your bet. 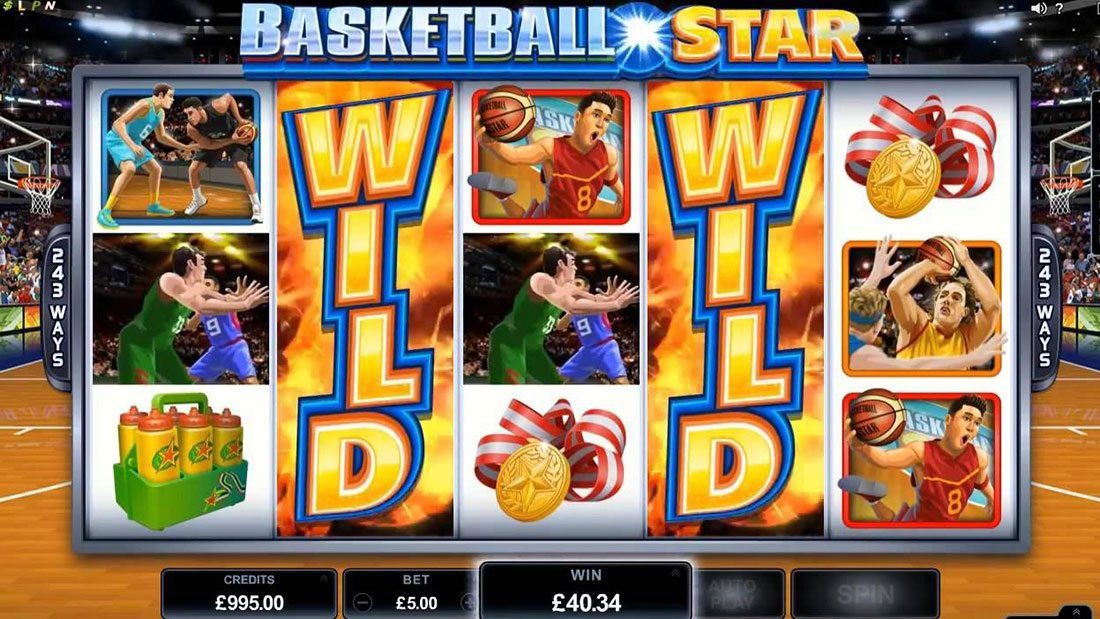 In the United States as well as the rest of the world, the National Basketball Association (NBA) has a massive fan following. The NBA has produced legendary players over the years such as Wilt Chamberlain, Magic Johnson, Julius Erving, Larry Bird, Michael Jordan, Shaquille O'Neil, Kobe Bryant as well as current superstars such as LeBron James and Steph Curry. It's only natural that the NBA's popularity would eventually translate to an action-packed, basketball-themed online slot. Basketball Star by Microgaming captures the high-intensity, high-octane world of basketball in slot form.

Every rolling reel win can enhance the multiplier to 10 times the value of your bet, so when you're on a lucky streak it feels like you're in the zone, shooting threes consecutively like Larry Bird or flying through the air with your tongue out like the great Michael Jordan. 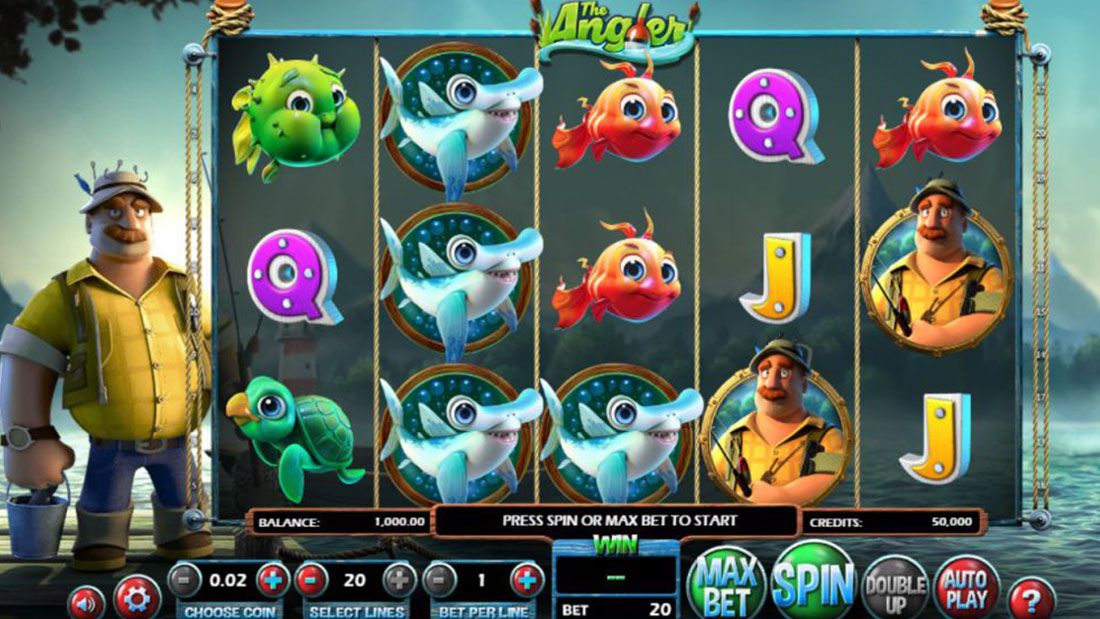 The Angler by BetSoft is a sports-themed slot of the fishing persuasion. That's right, it involves the sport of angling, which isn't exactly a ball sport but it's still a rite of passage of its own for many an American dad who likes to pass on their love for fishing to their kids. BetSoft's fishing-themed video slot features the usual topnotch quality that players have come to expect from the developer, which includes colorful graphics, free spins, and many exciting bonus features.

It has 20 paylines and high value symbols that include redfish, turtle, shark, green fish, and the angler himself. There are also Wilds in the form of the octopus symbol that appears on reels two to five that can be used to substitute symbols and form winning combos except for the Scatter symbols of the pearl and a bonus icon. For non-fishing fans, you'll be surprised at the execution of the game, including its exciting gambling feature and free spins galore that give you loads of chances to win it big.

Champion of the Track

NetEnt's Champion of the Track deals with the sport of horseracing. Now horseracing has always been associated with betting and this marriage of horseracing and online slot title makes perfect sense. This exciting NetEnt slot is a 5-reel, 30-payline title that offers a race track interface filled with board game symbols such as cards, dice, game pieces, and a score-keeping notepad. It's also filled with robust features that can lead you to sizeable wins.

The horse Scatter icon triggers the Free Spins whenever you land three or more of them across anywhere on the game's reels. Furthermore, the jockey Wilds symbol is the highest-value symbol with the most payout. It can net you up to 10,000 coins when 5 of the icons land on an active payline. If you get the second place ribbob you can earn an assured 1,000 coins, which isn't a bad deal.

When the bonus round is activated, you can go through the bonus trail or 20-step career track for your bonus coinage. The game is available online at Karamba Casino and gives you 20 Free Spins at signup.