Betting On Soccer In the USA By The Numbers 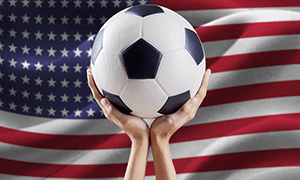 Just 17 days after sports betting became legal in New Jersey, punters placed $16.4 million in wagers. The sport that saw the most betting action was baseball bringing in $10.1 million. Despite being in the middle of their off-season, the NFL managed to account for $280,611 worth of betting activity. These were presumably future bets. Driven by the excitement of the 2018 FIFA World Cup, about $2.2 million was wagered on soccer including just over $500,000 in futures.

John Holmes - August 15, 2018 - Features
Betting On Soccer In the USA By The Numbers

Nevada and Delaware already had a sports betting industry up and running as they were the exception to the PASPA 1992 act. Currently, there are over two dozen states including West Virginia and Pennsylvania who are on the verge of enacting legislation that will legalize sports betting in their respective states. Gaming analysts expect a massive influx of sports betting numbers in these states in the coming months. The loosening, or should we say complete reversal of the status of betting in general online in the USA has already set off a new gold rush. Operators local and offshore are making big moves to take advantage of what is sure to be the legalization of sports betting and online casinos across America. It won't be long before we see the competition for betters heat up and we can expect some really juicy no deposit bonus codes flooding the market. Get Ready.

What Do Punters Bet On?

Sports bettors bet on several different sports throughout the year. The overwhelming favorite sport to bet on in the United States is the NFL. Stats show that 78% of people that placed bets in 2017 wagered on college or NFL football games. The NBA drew the second most bets with 43% of punters betting on it while college basketball, which gets a lot of attention with the NCAA tournament, saw 39% of punters betting on it.

When it comes to soccer, just 25% of sports bettors wagered on Major League Soccer (MLS) and European soccer which is just 2% below horse racing and 8% above hockey. Soccer is slowly gaining in popularity in the United States but the MLS brand is nowhere near as popular as the professional soccer leagues in Europe.

How Popular is Soccer?

It is estimated that there are over 4 billion soccer fans around the world. It is the predominant sport in many European, African, and Asian countries as well as in South America. The 2014 FIFA World Cup Final attracted over a billion viewers with about 32 million of them in Germany alone. Compare that to the estimated 103.4 million people who tuned into last year's Super Bowl between the Philadelphia Eagles and the New England Patriots and you can see that there is really no comparison when it comes to global appeal.

It is no secret that soccer is not as popular in the United States as it is elsewhere. However, a Gallup poll conducted in 2017 found that soccer is the favorite sport of 7% of Americans. That number is a 3% boost from four years ago. In fact, soccer was the only sport to make such a considerable gain. American football dropped 2% to 37%, basketball fell a point to 11%, and baseball saw its numbers go down by 4%.

There are a lot of signs that indicate soccer could actually surpass baseball in another four years. Even more eye-opening is the fact that 11% of the 18 to 34 demographic in the United States said that soccer was their favorite sport. Keep in mind that this poll was conducted in a year in which there was no World Cup to inflate that figure.

Will More Americans Be Betting On Soccer?

The current controversy surrounding NFL players kneeling for the national anthem is having a small but adverse effect on the NFL's viewership. That, plus other circumstances like the recent history of lockouts and labor unrest in the NHL along with the possibility of more to come in a couple of years could create the perfect storm for soccer to raise its profile even higher in North America.

This means that casual sports bettors who like to place a bet and watch the game could pay a lot more attention to the world's most popular sport. This is especially true if current trends continue. If sportsbooks like New Jersey's FanDuel continue to offer soccer betting then it is just a matter of time before more people start following and betting on the sport.

What Kind Of Soccer Bets Can You Make?

The days of a punter being limited to betting on just sides and totals are far behind us. These days, it's not uncommon to see dozens of bets being offered on a single soccer game. Like any other sport that involves two teams, soccer bettors can place a wager on the money line or the total like they have always been able to. However, sports bettors can also bet on a game resulting in a tie which usually offers a good potential payout.

Along with total scores for a given match, punters can also bet the Over/Under on just one of the teams. Most sportsbooks will let you try to predict the final score. You can bet on which team scores the first goal or the last goal and punters can even wager on the results of the first or second half of a game.

There are also usually lots of individual player propositions such as betting on whether a certain player will score a goal during the match. Let's not forget that some sportsbooks offer their customers special bets like a "draw no bet" which means that the stakes are returned if a game ends in a draw. Really, if there is something that a person can bet on then a sportsbook will likely offer it up.

USA no deposit casinos are known to offer free bets to new players.

Bookmakers that offer soccer betting will also allow you to bet parlays, also referred to as accumulators, and combos. Parlays are simply placing two or more separate bets on a single ticket. A winning ticket is one that has all of the predictions correct. For example, you could bet a three-team parlay on Premier League teams Everton, West Ham, and Chelsea to win their games.

If all three win then you win your parlay. The final amount is determined by multiplying the odds of each bet together and then taking that number and multiplying it by the wager amount. Casual punters are drawn towards parlays because their payouts are usually very attractive. However, if you get it wrong, you end up losing your money.

Combo bets are much the same except that you don't need to get all predictions correct. You can bet on correctly predicting 2 of 3 or 3 of 5 and so on. Like parlays, combos give sports bettors a shot at a very good payout. Whether you are placing a wager on a World Cup game or MLS, betting on soccer is just as exciting as betting on any other sporting event. Look for it become more popular with American punters in the near future.