The Story of the Phantom Gambler

The Story of the Phantom Gambler 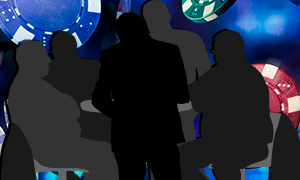 Las Vegas has always been a legend in its own right: a place where gamblers flock in daily to prove their worth and to make their mark in one of the few places in the world where high stakes and high rolling folk are seen in plain daylight, 365 days a year.

There are countless stories of gamblers winning the world and losing it all in a matter of days or weeks. There are also stories worth telling again and again, because the premise of the stories are so far out that you wouldn't believe it unless a Las Vegas fan or native told you it was the real thing.

One of these stories is about the Phantom Gambler, William Lee Bergstrom. Bergstrom is also known as the Suitcase Guy, because whenever people see him, he was holding a suitcase and looked pretty much like a walking salesman. But the fact of the matter was he was not a salesman, he was a gambler.

And a most special gambler at that because Bergstrom didn't play for entertainment. No one knew why Bergstrom played like he did, but one thing was for sure: he knew what he was doing, and he dared Lady Luck and the Path of Chance several times just because he could do it.

The Phantom Gambler's story begins in Austin, Texas, where he was born in the year 1951. There was only a little history that we could dig up about the life of this legend, but research confirms that William had a brother named Alan. These two men grew up in a tumultuous household because of divorced parents.

William lived his life without a father figure, which could possibly account for his legendary streak as a gambler in Sin City. Bergstrom attended the University of Texas, but he eventually dropped out of his program for unknown reasons.

William found himself in different jobs, but eventually settled for a career in selling real estate. He was also a salesman, and this would account for his appearance later on when he began shocking Sin City with his unique take on what it means to gamble it all.

Around the tail end of the 1970s, which was one of the big decades of Las Vegas, William Lee Bergstrom heard about a unique proposition from the Horseshoe Casino. The Horseshoe Casino was pretty much like every other casino in the strip, but with a distinct difference that set it apart from everybody else: the co-owner of the Horseshoe Casino lifted the wagering limit.

Every gambler knows that this is nearly impossible. Casinos are there to make money, and in the game of chance, the only way to reduce the risk of bankrupting yourself is by limiting how much a player can wager in any game or table. Benny Binion, the co-owner of the Horseshoe Casino, didn't want to have any of that.

Though this man was known for his connections with organized crime, he wanted to give Sin City something that other casinos have never done before. Benny Binion offered the "Sky's the Limit" wager.

But there was a catch. The Horsehoe Casino will only honor a wager of any size as long as it was the gambler's first wager for the game. Sounds crazy, right? And it probably was.

No one bets it all on the first wager. The chances of losing it all was huge, terrifically huge, that only those who can give Lady Luck a death stare can do it. But that person was the Phantom Gambler.

Bergstrom called the Horseshoe Casino and asked about the "Sky's the Limit" wager and asked if the casino will honor any wager of any scale, as long as it was the gambler's first. Benny Binion agreed to honor such a wager. Bergstrom then asked if the Horseshoe Casino would honor a wager worth $1,000,000. Again, the casino agreed. This sparked Bergstrom's legendary streak.

On September 24, 1980, William Lee Bergstrom casually walked into the Horseshoe Casino in Las Vegas with a suitcase. Bergstrom wore a grey suit and thick glasses that day. He looked every much the part of a salesman or real estate agent.

Only he wasn't interested in selling anything that day. William carried two suitcases. The first suitcase had $777,000 in it. The second suitcase was empty. Again, William asked Benny (the co-owner) if the casino will honor a wager of any scale, as long as it was the gambler's first. Again, the casino agreed.

Bergstrom walked solemnly to the craps table and bet all of his money on the "Don't Pass Line." He did not even bother to exchange his money for chips anymore.

The current player ended up rolling a seven. Bergstrom won his extremely risky wager. Benny Binion ended up congratulating the Phantom Gambler and even helped pack money into Bergstrom's suitcase. The Phantom Gambler would disappear for 3 ½ years after his first big win.

On March 24, 1984, William appeared again in the Horseshoe Casino. This time, he wagered a total of $538,000 on the "Don't Pass Line." He won once again. This time, he did not walk out immediately. He won some more money by placing three more bets. He walked away with an addition $117,000. Satisfied with his winnings, Bergstrom disappeared again without a word.

The third and final gamble

The fateful day was November 16, 1984. William Lee Bergstrom walked for the third and final time into the Horsehoe Casino, carrying with him $550,000 in cash, gold Krugerrands with a value of $140,000, and cashier's checks worth $310,000. Bergstrom was determined to make Las Vegas history by making the biggest wager on the first bet ever. For the third time, he bet on the "Don't Pass Line" on the craps table.

And he lost everything. Bergstrom walked away quietly, without a word, and was never to be seen again.

Tragically, on February 8, 1985, Bergstrom was found dead in his hotel room. He had been staying at the Marina, a hotel on the Vegas Strip. He had died from taking compounds from different capsules. In his suicide note, he stated that he wanted to be remembered by the people as "the Phantom Gambler at the Horsehoe."

But did Bergstrom's third and final wager break his finances? Apparently, he was not even close to broke. According to records, William still had $600,000 to his name at the time of his death. The people who were close to William however, revealed the possible reason for his early passing: he was heartbroken.

To this day, the Horsehoe Casino still honors the story of the Phantom Gambler, and gambling circles still look up to the man for having the courage to test Fate, Luck, and Chance all at once - and win twice in the process.

For mere mortals like us is suggestable to take advantage of a casino with no deposit offers and try build up a cash pile and then hit the real casinos hard.