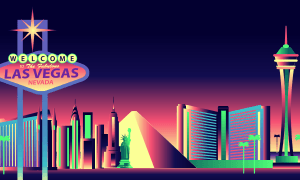 Video slot machines were being played in Vegas land casinos long before online casinos came into being. Some of these titles have been converted for online play and if your lucky you can play these slots with a no deposited bonus. But many high profile slot machines can still only be played in land casinos. Some of the best from those are reviewed below. 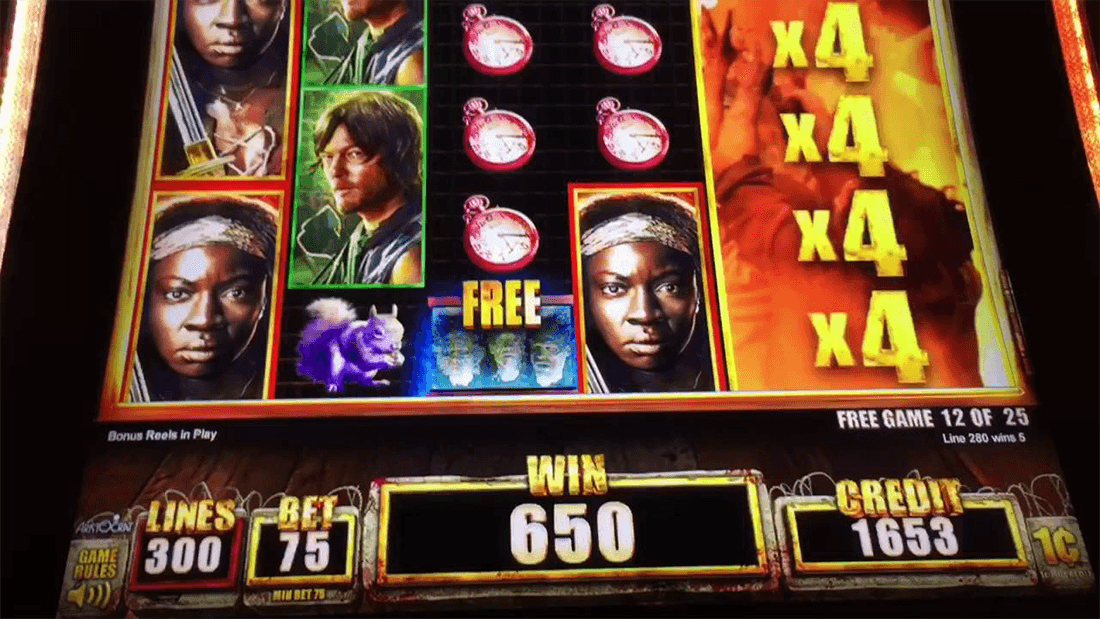 This Vegas video slot is based on the zombie television series that was first aired in 2010 and has completed eight seasons. This slot machine in the 5x4 structure is based on Season 1. There is ample gore in the artwork and chilling background audio to satisfy zombie fans. The high symbols feature popular characters, some of which appear stacked two high. Fans of the TV series will enjoy the original video clips. There is no dearth of gaming features. In the Reel Growth feature, the last four reels may randomly grow to a height of up to 7 rows. Random positions in the enhanced reels may be replaced with wilds. In the Atlanta Wheel Bonus you can win credits, progressive jackpots or bonus features. One of them is the Escape from Atlanta free spins that include guaranteed wilds. The highest progressive jackpot starts at $500,000 but requires play with maximum bet. This is one game we really want to see at an online casino with no deposit bonuses. 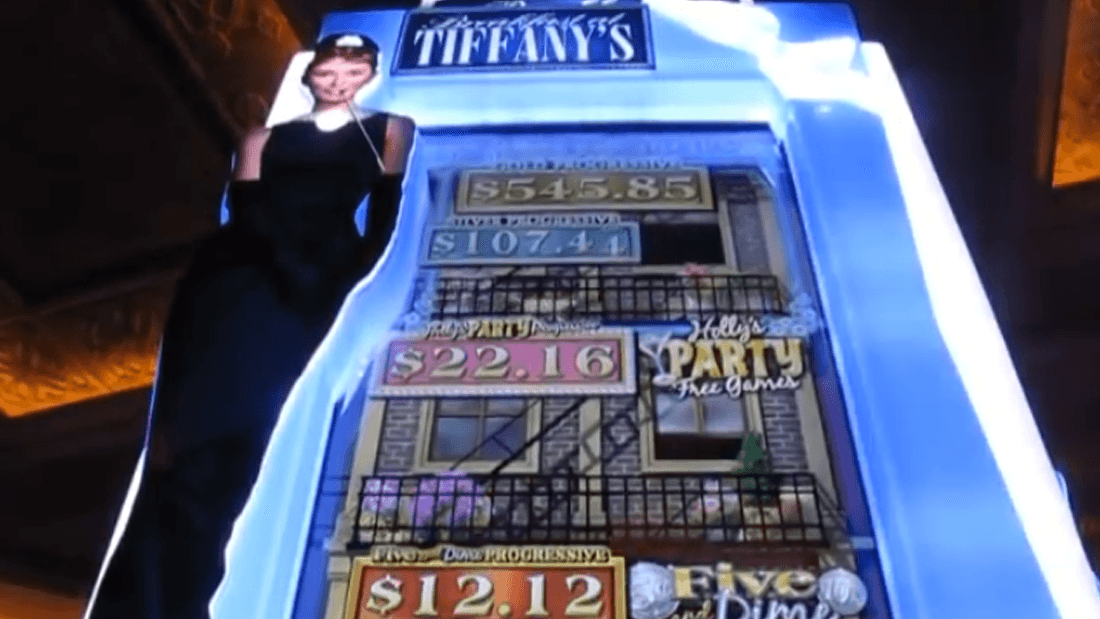 This is a classic 1961 movie that shot Audrey Hepburn to fame. The younger generation of slots players can link to the movie through this slot machine. It features clips and award winning music from the film. The slot machine has two sets of reels. One is for Holly (Hepburn) and the other for Paul (Peppard). You can play either or both sets. The common set of symbols include iconic items from the film such as earrings from Tiffany's, pink couch, Diamante hair clips and Holly's sunglasses. Holly and Paul appear on their own reels. A number of bonus features integrate events from the movie. In one you pet the ginger alley cat and win bonuses till the cat decides to go away. In another bonus the cat can lead to a progressive jackpot. Typewriter and Five & Dime Store are other bonus features. Players interested in free spins should look out for the Red Bow and the Bonus Wheel. 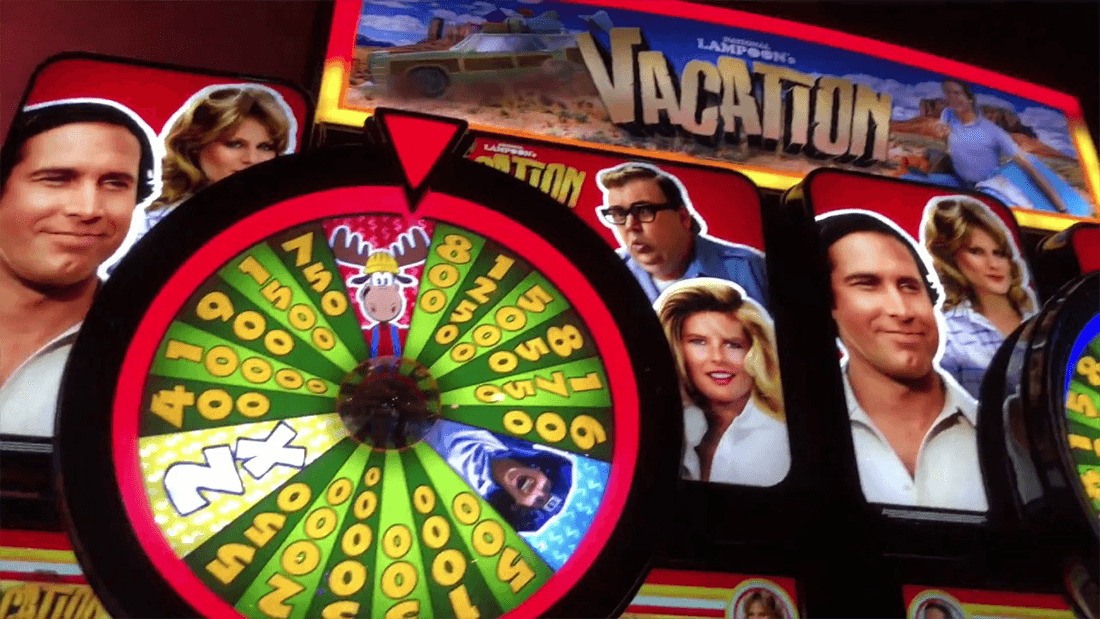 This American road comedy movie was released in 1983. The cult movie takes the characters through a number of hilarious situations. You can now relive them through this Vegas slot machine. As in any branded slot the characters and original content are included. But for the big wins you need to land three bonus symbols in the same spin. This will give you one spin on the big wheel that sits at the top of the slots cabinet. This wheel can deliver instant bonuses or payout multipliers. But it can also pave the way for more rewarding bonus features. One of these is the Walley World Bonus that awards 7 free spins. Special Marty Moose symbols can appear stacked on reels, which become sticky and move one reel to the right each spin. They will all reveal the same random symbol. So you can win a lot in 7 free spins. The other feature is the Griswold Family Vacation Bonus. In this special feature you simulate the family's drive across the country where you get to play mini bonus games linked to the movie. Some of the more outrageous ones are the Vibrating Bed Bonus and the Skinny Dipping Bonus. 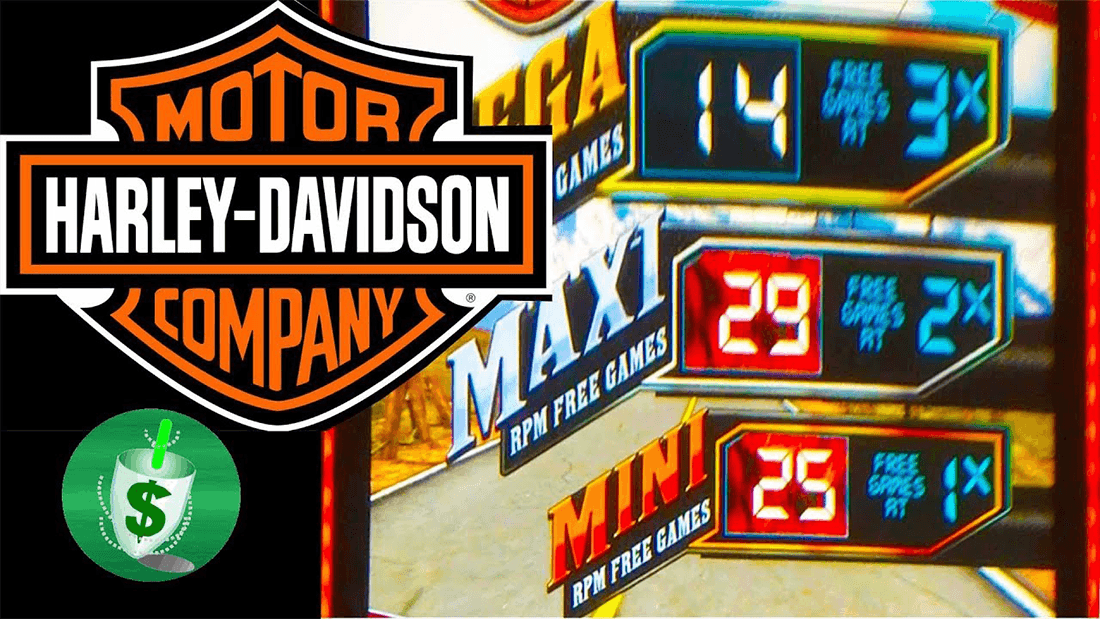 Harley Davidson is the first name in motorcycles. Riders of this powerful vehicle stand a cut above the rest. Cults like Hell's Angels, though known for notoriety, were nevertheless every man's envy. If you do not own a Harley Davidson, do not sweat. You can get your thrills on the Vegas slot machine. This slot machine includes an awesome array of audio effects including burning tires and gear changes. Low pay symbols are colored playing card icons. The high pay symbols are five classic Harley Davidson motorcycles in the same colors. The legendary Harley logo is the wild symbol that appears stacked for bigger wins. The bonus features are triggered by landing two bonus symbols with the appropriate wheel. You can trigger the Mini, Maxi or Mega free spins feature. The higher level features award more free spins with bigger multipliers. You can also trigger the Wheel Bonus. You spin a wheel to win bonus credits including a jackpot. You may be given a second spin or asked to collect your bonus. 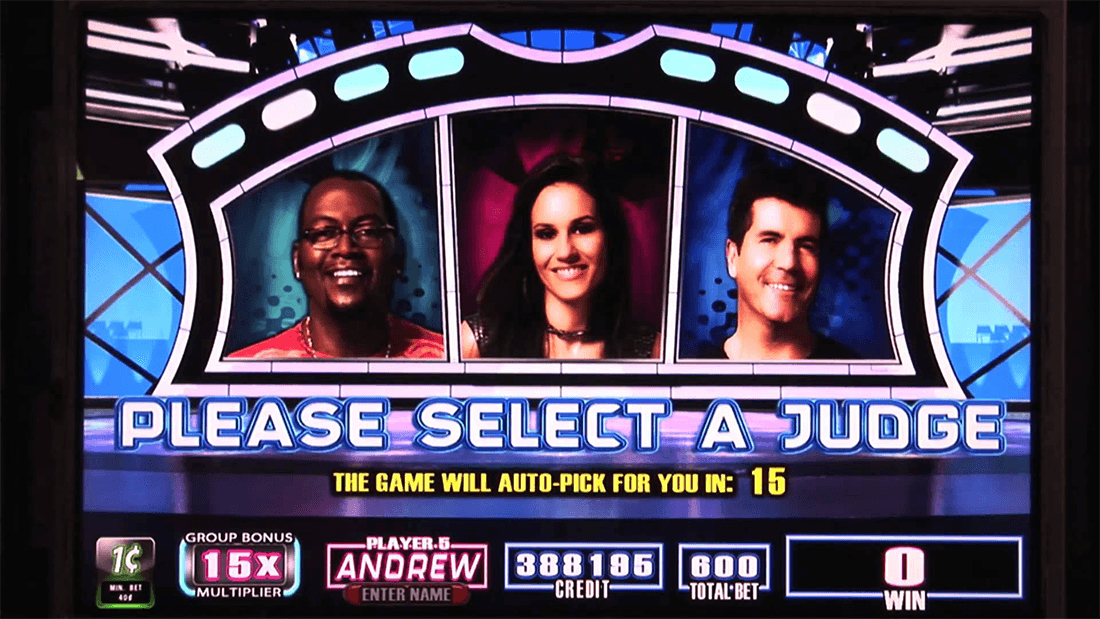 There are many Vegas slots that are based on popular TV game and realty shows. And you cannot get any bigger than American Idol. The show has had roaring success for an unparalleled 16 seasons. American Idol Superstar will take you down memory lane while giving you a chance to win big. American Idol Superstar has three games, one with each of the judges - Steven Tyler, Randy Jackson and Jennifer Lopez. The video slot uses original content from the reality show. The game is updated a regular basis to include the latest season's contestants on the reels. The Rapid Reload bonus is a respins feature. The Superstar bonus is randomly triggered. You have to select a superstar and vote for the contestant using the smartphone on the screen. The votes are converted to bonuses. If your contestant wins, then you advance to the next round. In the Judges Pick'em one judge delivers a bonus depending on whose game the feature is triggered. In Steven's bonus, three participants are presented by the audition page. You have to pick one who is going to get the Golden Ticket to Hollywood. You win a bonus of over 1000 credits. Players who love free spins will prefer Jennifer's game. It awards the Double Reload Feature with five free spins. Randy's bonus triggers the Top of the Charts feature. It is pick an object bonus round on the second screen where you win multipliers and bonuses.

Sooner or later all these Vegas casino slot machines will appear in online. You can wait till then or head straight to Sin City now. The choice is yours. For a quick flutter with no deposit needed carry on browsing our site.